Ukraine laid to waste, but still standing strong: What we know so far. Answering the whats, Whens and Whys of the invasion of Ukraine

So, why did Putin invade Ukraine?

On the 24th of February 2022, Russia invaded Ukraine, sparking the biggest war since World War Two. Putin told the Russian people that his aim for the unprovoked invasion was to “demilitarize and de-Nazify Ukraine”, and protect the Ukrainian people from 8 years of genocide and bullying by the Ukrainian government. However, he soon added that he wanted to ensure Ukraine’s neutral status from NATO – North Atlantic Treaty Organization. Putin maintains that it is not an invasion or war but a “special military operation” for a “noble” cause. This contrasts with Ukraine’s president, Volodymyr Zelenskyy, who warns of a “Third World War” if peace talks fail with Putin.

The North Atlantic Treaty Organization was formed by 12 countries, including the UK and US in 1949 as a response to the concerns of post-war Russia’s expansion in Europe. All the members agree to aid one another in the event of an armed attack on any individual state within Nato.

Soviet Russia responded to Nato with its own military alliance of eastern European communist countries; this was called the Warsaw Pact, however, after the collapse of the Soviet Union in 1991 many of these members joined Nato.

Russia has, for a long time, accused Nato of interfering in Russia’s area of political influence, especially as more countries in Eastern Europe have joined. When Ukraine attempted to join Nato, Russia believed this would bring the alliance right into their backyard. Ukraine’s membership in Nato, first offered in 2008, has long been pending due to Russia’s disapproval of it, however, after the Crimean war where Russia annexed Crimea, which is a Southern state in Ukraine, membership in Nato became a priority from 2004 onwards, but when progress increased in 2022, along with the de-Nazification, Russia demanded Ukraine never be allowed to join. When this was refused, Russia invaded Ukraine. After the collapse of the Soviet Union, Ukraine became an independent state, but Russia still views it as part of Russian culture and history, and as the fall of the Soviet Union destroyed the ancient history of Russia, so would Ukraine joining the Western-run Nato.

Nato has not interfered directly with the invasion, this is due to Ukraine not being a Nato member, so interfering risks escalating the conflict to the exterior of Ukraine’s borders and endangering the West. Although, individual members of Nato have provided aid – Weopenry, Economic aid and refuge to citizens. Most recently the UK permitted Ukrainian refugees to stay for 4 years. Furthermore, President Joe Biden has asked congress for a $33bn Ukrainian care package; this consists of over $20bn in military aid, $8.5bn in Economic aid to Kyiv and $3bn in humanitarian relief.

Since the start of the invasion, Finland and Sweden have spoken about membership in Nato, expected in mid-may, bringing the total to 32 Nato countries. Russia has warned the pair against membership. “He has triggered the opposite effect of what he wanted. He wanted to weaken Nato but Nato is now much stronger,” says Barbara Zanchetta. However Poland and Bulgaria, two Nato countries have been punished for the West’s support for Ukraine, by cutting off their gas supplies.

Initially, forces aimed to capture the capital, Kyiv (pictured Left as it is bombarded with missiles), however, after fierce resistance from the Ukrainian Army, the Russian invasion has withdrawn for a fresh tactic – assaulting the South and East.

Forces lined the Russian-Ukrainian border before the assault, marching West, capturing Luhansk, Donbas and Donetsk. From there most forces marched North West to attempt to capture Kyiv but have been pushed back by a strong defence. Re-grouping just outside of uncaptured Kharkiv, a new strategy was devised – an assault from the South and East. Taking Mariupol with hundreds of civilian casualties and Kherson, the invasion force likely intends to circle up the East of Ukraine and assault Kyiv again from both the East and West.

Signs of long-lasting settlement in Ukraine are clear, despite Putin stating his intentions are to cleanse not invade. Ukrainian officials have accused Russian forces of attempting to forward a referendum in Kherson to therefore annexe it, as Russia did with Crimea in 2014. Kherson is already set to change to the Russian currency, Rouble, from May 1st.

However, by not declaring this a war, the question remains on how many troops Russia has to dispose of. A land corridor along the south to the Black Sea is unlikely, with a takeover of Donbas being the last of its capabilities, states analyst Michael Kofman. 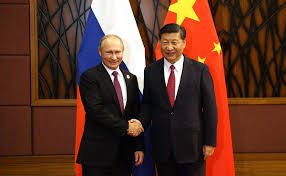 Yet not every nation is opposed to the invasion

Russia’s long-lasting ally, China has been warned several times by the US against involvement with the crisis, however, there has been a noticeable rise in Russia-China trade since the start of the invasion, despite the sanctions on the Russian economy greatly limiting its financial abilities. China has set to sanction Russia and has criticised the West’s harsh sanctions that brought the value of the Rouble crashing down to an all-time low of 150 per USD two weeks after the start of Russia’s invasion, losing 30% of its value. Despite this China’s trade with Russia has increased by 28% from the previous year in only the first quarter of 2022, according to Chinese customs data. Following a visit to Bejing, Putin announced the two would boost trade to $250bn by 2024. However, the EU is still the biggest trader with Russia, hesitant to restrict coal and gas trades with Russia as a sanction as many countries, especially Germany which relies on two-thirds of its gas supply from Russia, rely on it as a nation. Yet, Russian exports to China have been increasing by 9% annually, soon to overtake the EU.

The two nations announced a new oil and gas deal worth an estimated $117.5bn yet data has shown China’s crude imports from Russia dropped 9% in the first two months of 2022.

But will China aid Russia military wise in their invasion of Ukraine? About 80% of China’s total arms imports were from Russia between 2017 and 2021, according to Stockholm International Peace Research Institute, yet reports of the Kremlin asking China for military aid have been labelled untrue and “Disinformation” by China.

How has the invasion affected the Russian people?

“Russians also oppose the war” stated Kai Katonina, a Russian Anti-war protester in Berlin who designed a new, peaceful White and Blue anti-war flag that sparked a movement worldwide. The first anti-war demonstrations in Russia took place already on 24 February with around 2 thousand participants in Moscow and 1 thousand in Saint-Petersburg. Protests also occurred in other large Russian cities, such as Yekaterinburg, Chelyabinsk, Nizhny Novgorod, Novosibirsk, and Perm. By the end of the evening of that day, according to the OVD, there were 1,800 arrests in 58 cities, of which around 1,000 were carried out in Moscow. Protests continued the following days bringing the total number of arrests to 3,000 people throughout the country by 26 February.

Providing help to Ukraine and its citizens during the war could be considered state treason, punishable from 12 to 20 years of prison. This is one of several new legislation passed during the invasion, making voicing any opinion in Russia increasingly more dangerous.

Furthermore, with the fall of the value of the Rouble, simply eating in Russia became almost impossible in the first 2 weeks of the invasion, however, with careful investments and the EU warry to sanction Gas due to the West’s reliance on it, the economy, yes damaged has recovered slightly since its 30% loss of value. There has been an ongoing peace talk with Putin and the Kremlin since the 28th of February, however, it has been to no avail with Russia demanding Ukraine never be allowed membership to Nato, something that cannot be granted as Ukraine is an independent state.

Despite these setbacks, Nato members still individually back Ukraine with Aid – finaancially and milatary based; including an in-the-making aid package from the US and a growing bond between Prime Minister Boris Johnson of the UK and Zelensky (However many believe this to be a publicity stunt due to falling numbers of voters due to Partygate – an ongoing investigation to Lockdown rule reaches during the height of Covid (more in another article)).

Meanwhile, the world sits and watches, guessing Russia’s next step. The Ukrainina defence holds strong but it is believed that Russia has its sights set on more than Ukraine. If Putin strikes a Nato member it could lead to another large, world-scale conflict, perhaps even World War Three. At present, the conflict remains within the borders of Ukraine and Putin has insisted he will not use nuclear or chemical Weaponry.

1 thought on “Ukraine laid to waste, but still standing strong: What we know so far.”